Theme parks are my jam. Growing up in Florida, we were fortunate enough to be able to visit them often. Sea World. Busch Gardens. Adventure Island. Universal. Disney. Every year, we’d get an annual pass to one of them and since Orlando was less than 2 hours away, we could easily go for the day.

Of course, we didn’t always have  the money for annual passes, especially not at the outrageous Disney prices, so during our first few years in Florida, theme parks were not a regular occurrence. In fact, they were so expensive and we viewed them as such a treat that just the idea of going to Orlando and being NEAR them was exciting to super young Adam and Ashley.

The first time my parents took us to Disney World, we didn’t think we were going to Disney World at all. No, our parents lied to us (as they so often did!), telling us that my dad had a meeting on Disney property and that we’d get to go hang out in one of the buildings at the front of the theme park.

“You’ll be able to see the castle!”

OH BOY. We were stoked. Not even kidding. We thought we were going to get to walk on Disney property, see the castle, and wait in an office building while my dad gave a presentation, and we were legit excited.

“Can we buy some Mickey ears?!” I asked.

I remember the car ride to Disney very, very clearly. They had gotten us up very early for the drive, so we’d be there by the time the parks opened. I remember my mother telling us to wake up, we were nearly there. I leaned up from my pillow, wiping the sleep from my eyes, and THERE IT WAS. DISNEY. And there we were, already in line, just to get into the parking lot.

“THERE’S MICKEY!” Adam and I were so thrilled to see the Mickey Mouse at the top of the sign that let you know you were entering Magic Kingdom property.

My mother paid the parking fee and tossed clothes at us to change into. We couldn’t wear our pajamas into the park.

“Why not? We aren’t going on any rides.” It didn’t make sense to me that I had to change into clean clothes if we were just going to be waiting around for a couple hours for my dad.

We turned into the parking lot, and I noticed the grin on my mom’s face. Something was up. WHAT WAS GOING ON.

“Well, actually….” she said. “Your father doesn’t have to go to any meeting at all.”

“Because we’re going to Disney!”

“Hurry up! Get dressed so we can go inside.”

“We’re going inside the park? We have tickets?”

“Yes! Hurry! Let’s go! You can see the castle from INSIDE the park!”

MIND BLOWN. I have never changed clothes so quickly. This whole time, we thought we were going to hang out near Disney World, having a non-Disney day, but all along my parents had planned to take us INSIDE and get us annual passes!!! #bestparentsever

It wasn’t until many years later that I did have myself a true non-Disney day, a day during which two friends and I went to Disney, without actually going to Disney. 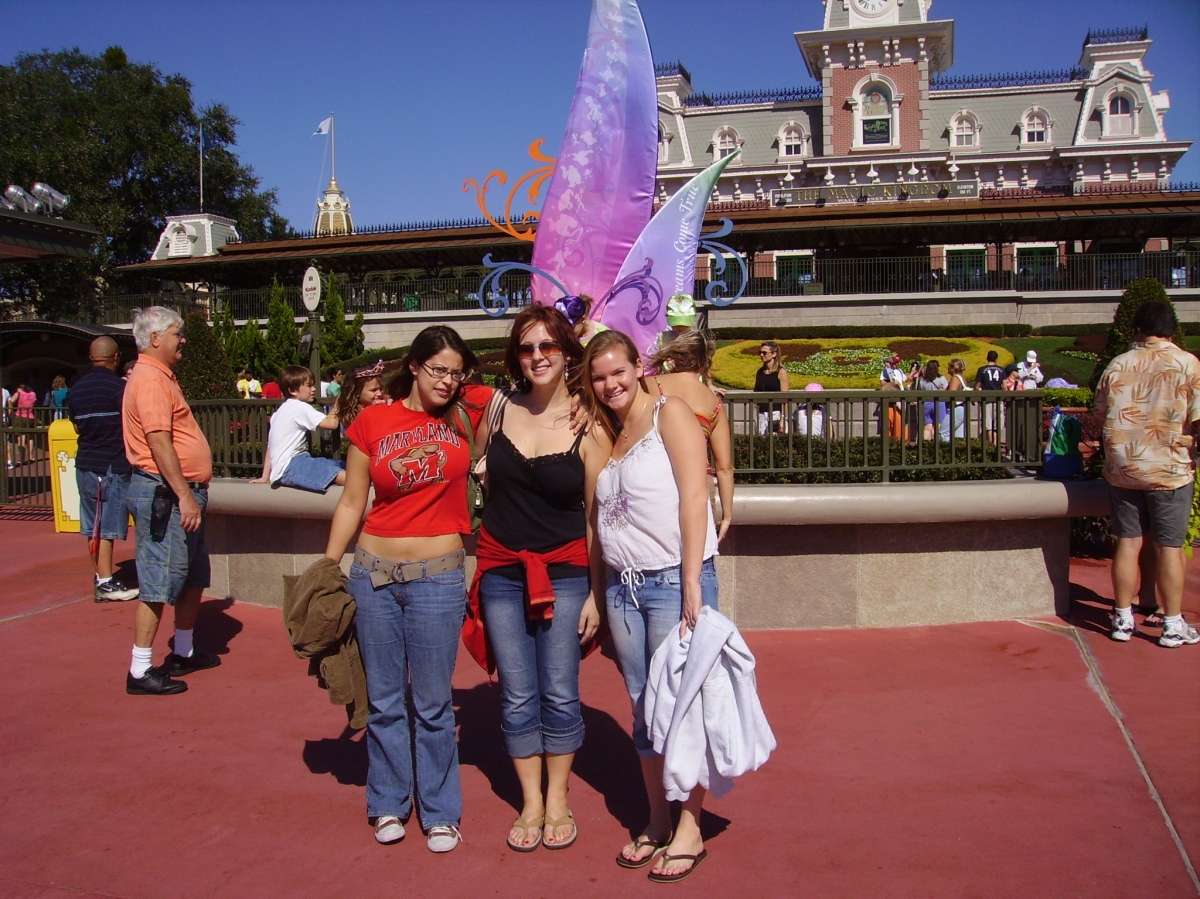 Three broke ass college students can’t afford Disney tickets, but luckily Orlando theme parks make it easy to have a lot of fun near the parks without having to spend much money at all. So if you’re ever broke but still want to have fun at some theme parks, let me give you some tips.

Visit the entrance(s). The front of the park will usually have good photo and people-watching opportunities. Sometimes there are gift shops or other vendors where you could get Mickey Ears, an animal balloon, or some other knick knack to commemorate your non-trip. At some places, like Sea World, you can even see some animals at the entrance! 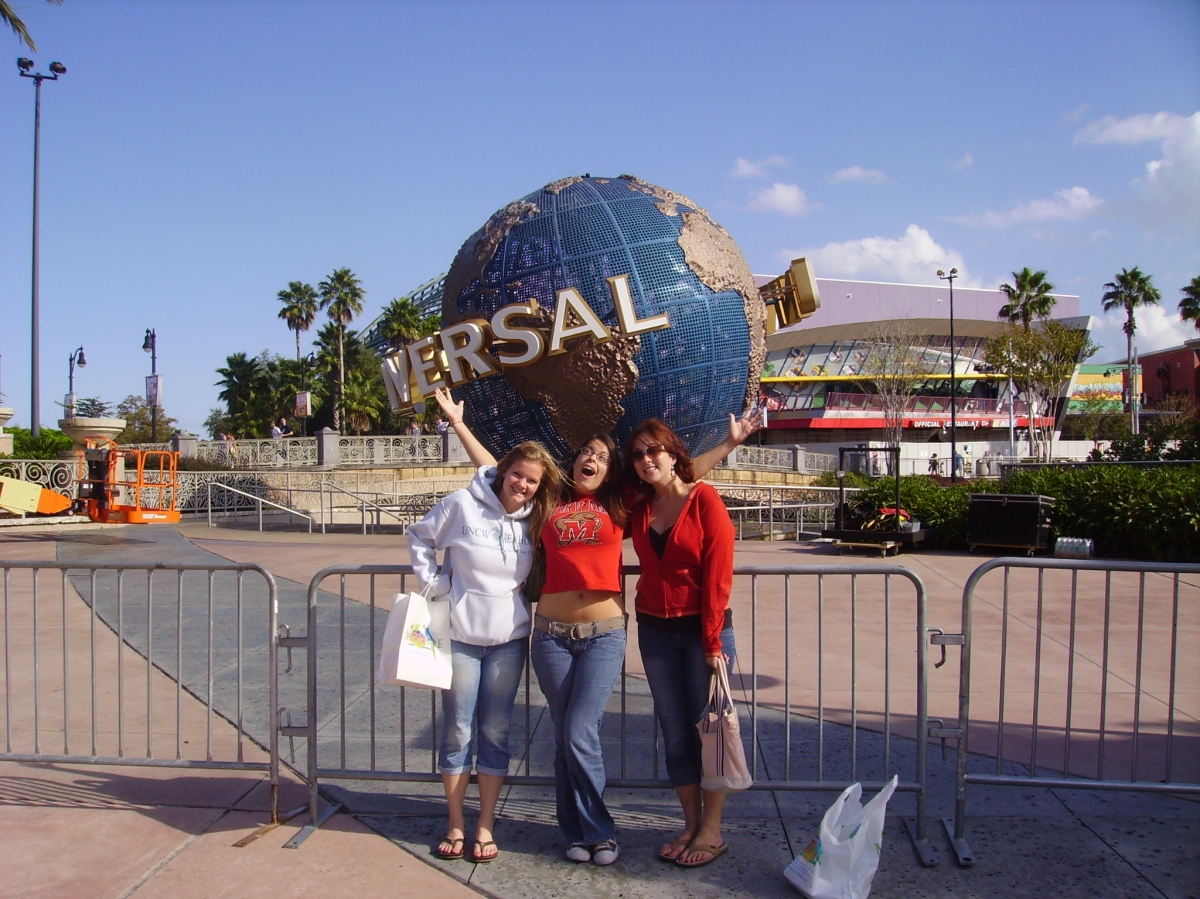 Don’t park. Otherwise, you’ll have to pay a parking fee. Park at a hotel and take the free shuttle. Or, if you can’t avoid paying a parking fee, pick one place to park and leave your car there all day. This is easy to do at Disney or Universal in Orlando since there’s so much to do around each set of parks. 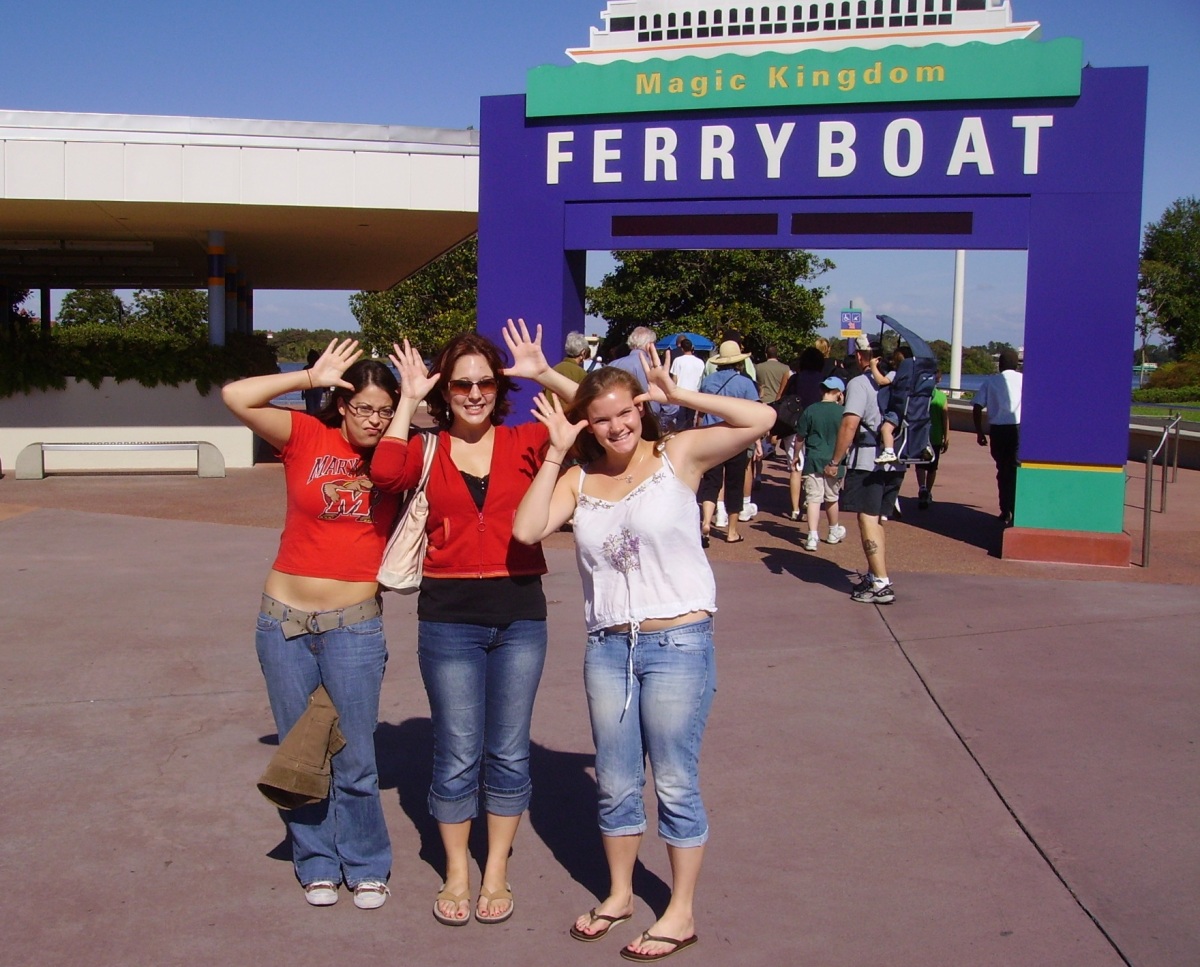 Ride the monorail. And if you ask nicely, sit up front!  The monorail is, technically, a ride. So is the ferry 🙂

Treat yourself to one fun meal. We opted for overpriced food and delicious margaritas at Margaritaville, which was super cheesy but fun.

Go shopping. Citiwalk and Disney Springs both offer lots of shopping opportunities, including art galleries and themed stores where you can blow a lot of cash or find at least one token to take home. 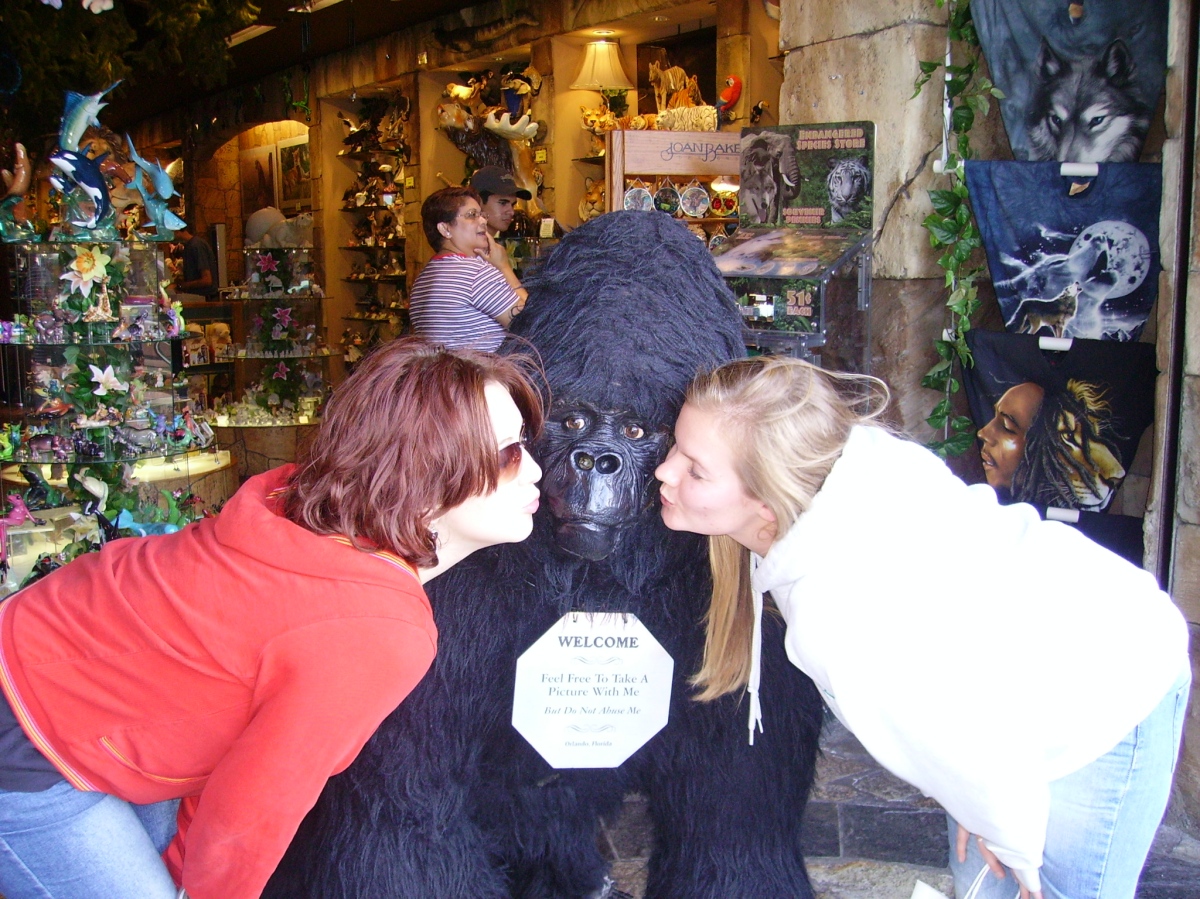 Turn everything into a photo opp. So you can’t go ride rides and meet the characters. That’s okay. There are still lots of great places to take selfies and jumping pictures. 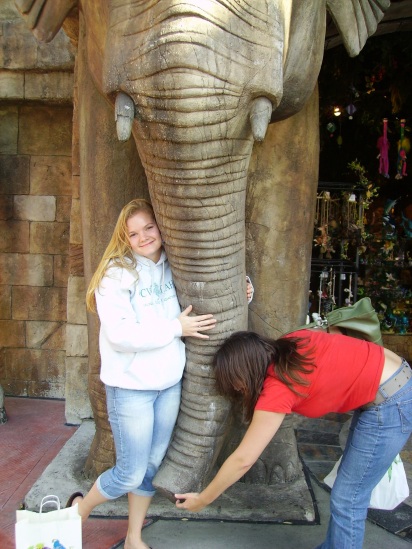 Not Eeyore the Elephant but still a fun photo 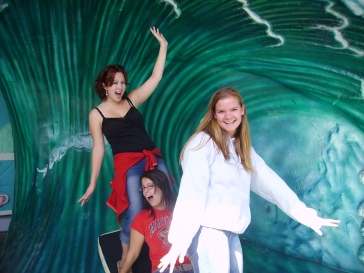 Not Lilo and Stich but still a cute pic!

Not Pixar’s Cars but still cool!

Make a game out of it. Play with Sneaky Cards or create your own Photo Scavenger Hunt for the day (human pyramid in front of park entrance; selfie with a tourist who doesn’t speak English; a funny hat). This will let you meet people and take a lot of great photos.

Jumping pix are always fun but watch your knees 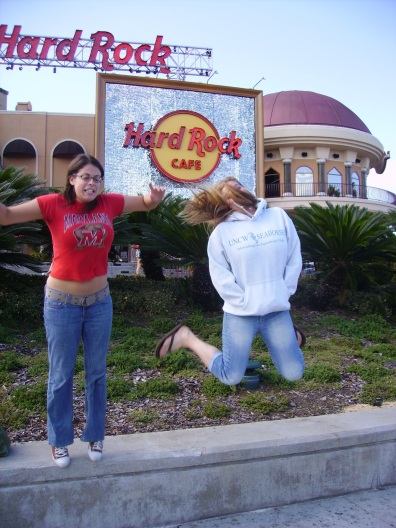 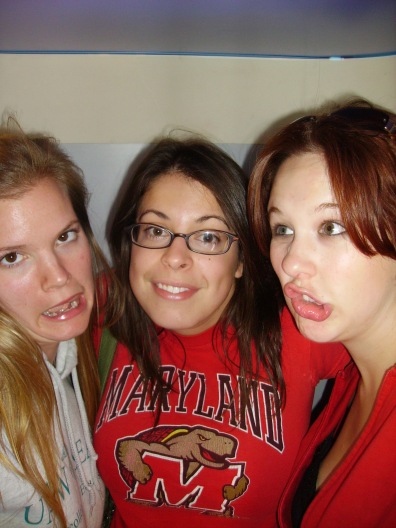 Faux-to booth pix are the best

Just because you’re broke or on a strict budget doesn’t mean you can’t have a little fun. It just takes some create thinking and open minded friends.

Have you ever had a non-Disney day? Do you have any tips for enjoying the non-theme park elements of theme parks or to have theme park fun on a budget? What’s your favorite theme park?