I don’t even know where to begin. Today was one of the weirdest days, and I am so grateful it ended the way it did. Seven co-workers and I headed to Opry Mills mall for a team-building scavenger hunt. Our plan was to split into two teams, spend a couple hours doing the scavenger hunt, grab Which Wich to go back to our house to look at all of the pictures and see which team wins the game. When we all arrived at the mall, half of the team was having extreme anxiety about the whole thing. So I said we could do anything else, whatever they wanted. Justin suggested getting margaritas, someone else mentioned getting food. No one would make a decision, so one of co-workers said, “Let’s go to Chuy’s!” And started marching off.

About 30 minutes later, just after our food had arrived and we were all half-way through our margaritas, we hear a ruckus at the front of Chuy’s; seems like there might be a fight! We can’t tell if it was between customers or staff. Either way, what a dramatic thing to happen at 2:30 in the afternoon! A woman scuttles quickly away from the foyer into the bar area. Another hollers. Two moms race through the restaurant pushing their strollers to go lock themselves in the bathroom. More ruckus and more scuffle at the front, and an employee runs through the restaurant to the back. We’re all alert at this point; what is going on? How serious is this fight?

“It’s a gun. Lock the doors. ” Or something similar to those words shot into the air. We were up and out of our chairs. Did they say gun? There’s a shooter? What do we do?

We all head into the kitchen. Other patrons slide under their tables. A few head into the bathrooms. Servers both deliver food and rush to other safer areas. Some people are still by the windows but they need to move.

Seconds minutes eons pass. Should we call 911? Someone surely called 911. I’ll call 911. Should we call our parents? Not yet. Let’s wait. Don’t want to worry them. There’s a general sense of mild confused alertness in the restaurant. Not total panic necessarily — they’d locked the doors and the only way to enter Chuy’s is by exiting the mall and walking maybe 60 yards to the front door of the restaurant — but everyone was highly alert, craning necks and worried eyes searching for exits.

Not exactly the team building I had planned for.

The next hour and a half is kind of a blur. A lot of emotions. A lot of questions. Why is this happening? What’s going on? Would it be ok if I drank my margarita? More than anything, it was weird. It was a lot of things, though. Scary, yes, when we didn’t know if it was a random mass shooting with multiple shooters making their way through crowds. Confusing, also, while reading conflicting reports online — is it 1 shot or 4? Are there 2 shooters or 1? Has anyone been caught? Worried, every time one of the SAC guys went up to the front of the restaurant to look out the windows or talk to someone. Relieved, when we heard it was probably not a mass shooter but an escalated two-person dispute, then tense, when we heard there could be another shooter, and two helicopters were circling the premises. Bewildered, as we wondered why this is happening again, so soon. Guiltily thankful, perhaps, that this wasn’t another Waffle House or Parkland. Secure, when the cops showed up, and people were allowed to leave the mall.

Chuy’s handled the situation remarkably. Management remained calm, the atmosphere under control. They had turned the music off, and switched the TVs to the news. Servers were told to comp some drinks. Ultimately, I think we all felt safe there, or as safe as we could be in this scenario. Logic told us it was not an easy, or smart, place to shoot up if you were going on a rampage, and the cops had already formed a barricade just outside.

By the way, I’ve never seen this many cop cars in my life. On our way out, after we got off of the intense emotional roller coast of the previous hour and a half, as we made our way around the outside of the mall, we must’ve passed 100 cop cars. (We also passed a news crew and somehow made it on the news, and several people wearing FBI vests.) Also, I’m not sure if this is ironic or just coincidental, but there happened to be a police training exercise going on in a parking lot on the other side of the mall.

It was just so surreal. Still is. I have never been in a similar situation and hope to never experience it again. My heart goes out to those who have lived through mass shooter scenarios, which must be absolutely terrifying; my pulse raced the fastest when that possibility still loomed. My heart aches for those who’ve been closer, who’ve heard the shots, who’ve seen the blood or had it on their clothes, for the victim and his family, for anyone who’s ever lost someone to gun violence. I can’t begin to imagine what that was like; this was enough.

The police outside Chuy’s

After being let out, we had to pass so many cops and cop cars. Apparently this is right after we passed the suspect in custody in one of the cars.

Some of the scene on our way out. 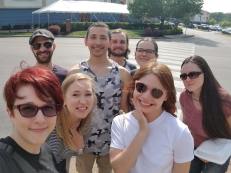 We weren’t sure if we should smile or not, but we were all so thankful that we were together and safe. The thought that we might have been split up doing a scavenger hunt inside the mall when this went on is so stressful. Very glad social anxiety saved the day and told us to go eat chips and drink margaritas.

Some of my husband’s tweets:

At opry mall and there’s an active shooter

More police. Not a good sign. Told hospital is preparing for multiple shoot victims but can’t confirm that obviously. pic.twitter.com/4B0ek7rP0v