One of my favorite ways to pass a sunny afternoon in Nashville is to play tourist in my own town and remind myself of all the beauty, tastes and fun that our city can offer.

Justin and I had ourselves a little mini-moon the three days following our wedding, during which we stayed in an AirBNB down near Belmont, day drank in the Gulch, hung out in Centennial Park, and ate our way down 12th Ave South. We both kinda wished we’d had more time.

The Pub, in the Gulch

A couple years ago when I was just having the worst day, Justin made me put on pants and took me downtown where we wandered around, went to the candy shop, hung out at a honky tonk in broad daylight, and made fun of tourists. Heck, we even took my father-in-law on a virtual tour of Nashville for Father’s Day one year. Sure, we did it to create a cute video keepsake to send to Justin’s dad, but we also had a blast putting it together.

Phil goes to the symphony!

Hanging out downtown Nashville and this happens.

Whenever friends come to visit, I make sure they see my favorite parts around town, give them a few brief history lessons, provide plenty of photo opps, and get to taste some delicious noms. As a broke fresh-out-of-college kid, I wanted to make sure the tour was essentially free, so none of the things on this list cost money, with the exception of parking and food. Each tour I give is slightly different from the last, but they usually include the same staples. 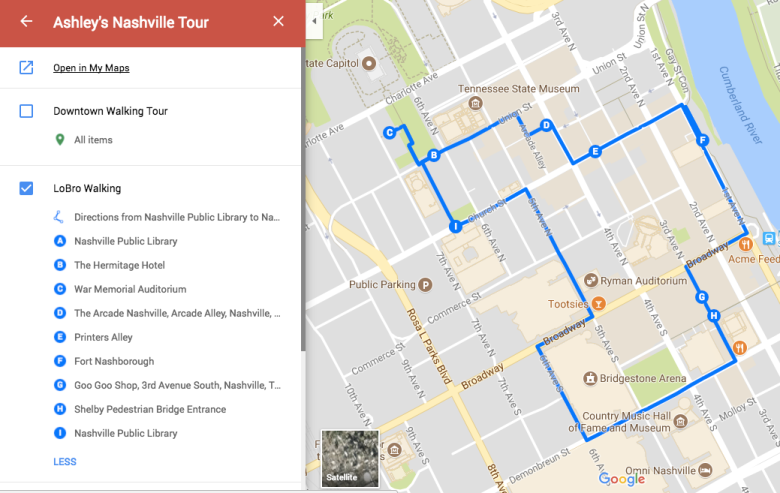 My full tour is part driving and part walking with stops at the Opry Hotel, Centennial Park, and a few murals, and a lot of LoBro. This weekend, I took one of my father’s friends and colleagues, Marc, on a quick version of the downtown tour, with a few added stops on our way home, which I’ve detailed below. Please note that this version of the downtown walking tour does NOT include any time on lower Broadway, so be sure to take some time to visit at least one or two classic Nashville honky tonks; I recommend Robert’s Western World, Layla’s and Paradise Park.

Use this map and list to plan your next Nashville Staycation or have yourself a fun afternoon when you can’t think of anything else to do. Happy exploring! 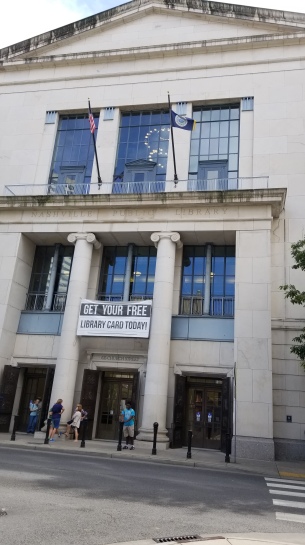 Parking downtown has gotten astronomical in price, so I still usually park at the Library. It’s $8 for 12 hours, with a max of $13 for overnight. You can’t beat it. And if you go in the library and check out the Civil Rights Room or the Flood memorial, or the quaint little courtyard or reading room, you could probably get your ticket validated. Provence cafe is also accessible from the lobby of the library if you’d like a croissant and un café. 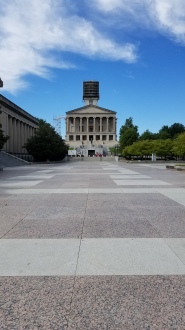 The (under construction) capitol

This open-air space is home to many public events, including my favorite, the Southern Festival of Books, and provides a nice view of the Nashville capitol building. The memorial commemorates World War I, and there’s also a statue honoring the soldiers who fought in the Korean War.

The Hermitage Hotel is a beautiful, ornate hotel built in 1910 home to the Oak Bar, which has been featured on the TV show Nashville. I recently learned that during prohibition, the Oak Bar was a favorite haunt for anyone who wanted a cuppa something strong and that alcohol was cleverly served in teapots. The hotel is also home to one of the most famous men’s rooms in the country, restored to its art deco glory. Rumor has it that a tunnel ran from the hotel’s men’s room to the capital so politicians could sneak in their ladies of the night.

TPAC and the Tennessee State Museum

If you have a little extra time and want to get your history on, check out the free museum underneath our performing arts center.

It makes me sad that this place is so seemingly underused and quiet; the only times I’ve seen it come alive is during the First Saturday Art Walk since it’s located in the center of the arts district and houses a few galleries. Built at the turn of the 20th century and modeled after traditional Italian arcades, the Nashville arcade is now a quiet place on weekends with most of the businesses that exist there now operating during the week. 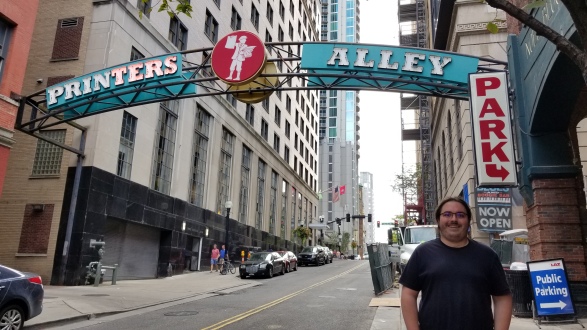 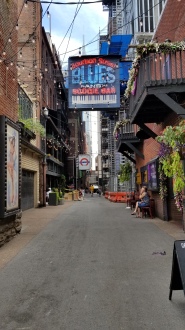 This place has changed so much during my 9 years here. It used to be kind of sketchy with strip clubs, a speak easy where someone was murdered, and bars that smelled like piss and broken dreams. Now, most of it is under construction and it looks like they’re adding condos. Condos. On Printer’s Alley. I really don’t get it. But the history of the alley is interesting: originally home to two newspapers in the early 1900s, it became the dodgy nightclub district in the 30s and 40s.

Just slightly south of the original location, this recreation of the original Nashville settlement from 1780 has just been finished and is the first part of a three-phase reconstruction that will include classrooms, details about how the settlers lived, as well as sculptures honoring and information about the local Native American tribes.

You’ll get an awesome view of the city from the Shelby Street Pedestrian Bridge, and you can access it either by a stairwell on 2nd ave or the ramp entrance on 3rd ave.  I like to walk up 3rd ave so visitors can stop by the Goo Goo shop to get the famous sweet treat on the way. Fun fact: this is one of the longest pedestrian bridges in the world!

I think this is one of the most beautiful buildings downtown, and there are many to choose from. If you ever get the chance to see a concert at the Schermerhorn, do it! The hall is gorgeous and provides an awesome musical experience. Note: it’s pronounced SKER-mer-horn.

On your way to our massive yet eco-friendly conference center, walk through the Walk of Fame park and pass by the Country Music Hall of Fame which, if you have the time, is a really cool museum. But for those on a tight budget – of dollars or minutes – skip the museum, and sneak into the conference center. It’s usually open so you probably won’t have to social engineer your way in. Find your way to the 4th floor; the easiest way is through the big, central entrance and to go up all of the escalators, until you can’t go up anymore. There are three worth-while stops here: first, peek out the windows onto the roof. Designed to mimic the rolling hills of Tennessee, the green roof features over four acres of grass AND BEES! They have their own honeybees and use the honey in their kitchens. The other cool thing is the awesome views of Nashville; there are two different balconies – one on the front of the conference center, facing towards Broadway, and one on the corner, facing the river.

Originally built as the Union Gospel Tabernacle and later home to the Grand Ole Opry, the Ryman is one of the most Nashville places in Nashville. Just make sure you walk up 5th avenue so you can avoid the out-of-place and disappointing modern extension on the 4th avenue side.

Other Spots Along the Way

The view from The Diner; the Schermerhorn on the left

Clyde’s on Church, a fun non-college bar in midtown

Get your smoothie and health food fix at the Daily Juice, nosh on some delicious tacos and margaritas at Bakersfield Tacos, and check out 6 floors of food and drink at the Diner — all on 3rd Ave. Find the Johnny Cash mural on Malloy Street. Visit the historic Hatch Show Print shop then grab a drink on the roof of Pub 5, both on 5th Ave. Get your 1892 on at Merchant’s on Broadway. Then walk up to 10th Ave to visit the Frist Center for the Visual Arts, which used to be the US Post Office. Go in Union Station, an historic hotel, featuring gorgeous stained glass windows, that used to be a train station. If you’re into beer, have a pint at the Flying Saucer; yes, it’s a (south eastern) chain but the other locations aren’t nearly as cool. Don’t forget the historic Hume-Fogg high school, which opened in 1855 and was Nashville’s first public school; if I were a student here, I’d pretend I was going to Hogwarts every day.

Go back to the library parking garage, get in your car and head down Broadway to midtown. There’s lots you can explore in this area from the Parthenon in Centennial Park and the view from Love Circle to college bars and the famous Catbird Seat restaurant, but we’ll save that for another day. 🙂

The Athens of the South 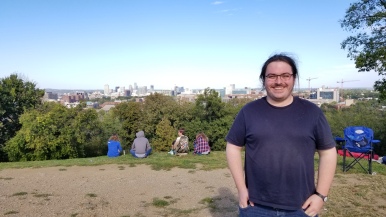 What are your favorite spots in downtown Nashville? Where do you like to grab lunch or a happy hour cocktail when you’re in town? Where do you get the best views of the city?