Since August 1, 2016, our beautiful sweet furbabies Cosmo and Dexter have spent 50 nights at our home. The rest of the time they’ve been staying at Grandma and Grumpa’s house, sometimes with us but most of the time without.

They get shuttled back and forth between our two houses so often that both places feel like home. They know when we turn onto my parents’ street and when we’re pulling onto ours. When we park in my parents’ driveway, and I open the car door, they both race up the front walk way straight to the front door. They love going to Grandma’s.

They always know something is up when we start packing their stuff, and they have a lot of stuff. When we were prepping for our home exchange, we filled my car with their stuff. 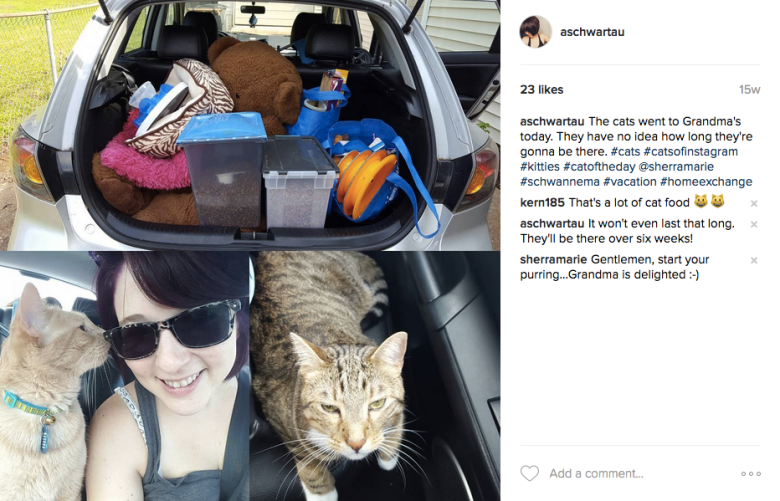 Recently, the cats went with me to run some errands, and the drive-thru pharmacist said he’d never seen cats riding in a car like dogs. They’re our little cat-dogs and always have been, and my philosophy has always been to annoy them into tolerance. It worked with my furbaby Oreo (who tolerated my BS for 23 years and traveled cross country!) and with my parents’ cat Cheeto (who doesn’t get bothered by much, except when Dexter attacks him). By annoying them when they’re young, they deal with stress and unexpected occurrences a little better when they’re older.

From the day both of the boys came into our lives as 7 or 8 week old kittens, we’ve annoyed them by playing with their paws, making them wear harnesses, taking them on car rides, changing up their litter situation and introducing them to other people’s pets. In doing so, it’s made claw-trimming, vet visits and changes in our routine a lot easier to deal with. Sure, Cosmo is still super rude to his dog cousin Cookie and Dexter doesn’t like large groups of people, but for the most part, they’re  chill cats who handle a lot of shake-ups without freaking out.

Cosmo and Dexter have also each been on road trips with Mama: Cosmo visited his cousin Charlie in Tallahassee, and Dexter visited both Charlie and his cousin Livia, in Indiana. One of my #40Before40 list items is to go on a big family road trip with both cats! Not sure where we’d go, but when we do, we’ll do what my mom and I did in the past: set up a litter box they can use on the go; give them familiar pillows and blankets to lie on and get comfy; bring water and food we can easily distribute; and make them wear a harness and leash so we can explore our destination!

The boys, riding in Grandma’s car, headed back home.

Learning to wear a harness from a young age 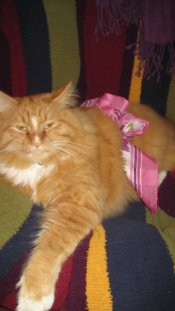 Cheeto tolerates all sorts of indignities 😉

Cosmo in the car, headed down to Florida

Do you have traveling cats? Has your feline friend been on any fun trips? What tips have you found to make roadtrips easier for furbabies? Tweet me @ashleyschwartau your #adventurecat stories!