We arrived on Wednesday, Aug 10. It’s been a fun, but not over-taxing, four days. We’ve seen some and still have some of the big sites to see (up next: la Sagrada Familia and Park Güell) but have walked nearly 29 miles and feel like we’ve seen a lot of the city. We’ve hung out in our quarter (el Gótico, el Raval, la Barceloneta, la vila de Gràcia). We have four more days, and lots more to see, but I wanted to go over our first few impressions of Barcelona.

You can drink for cheap. 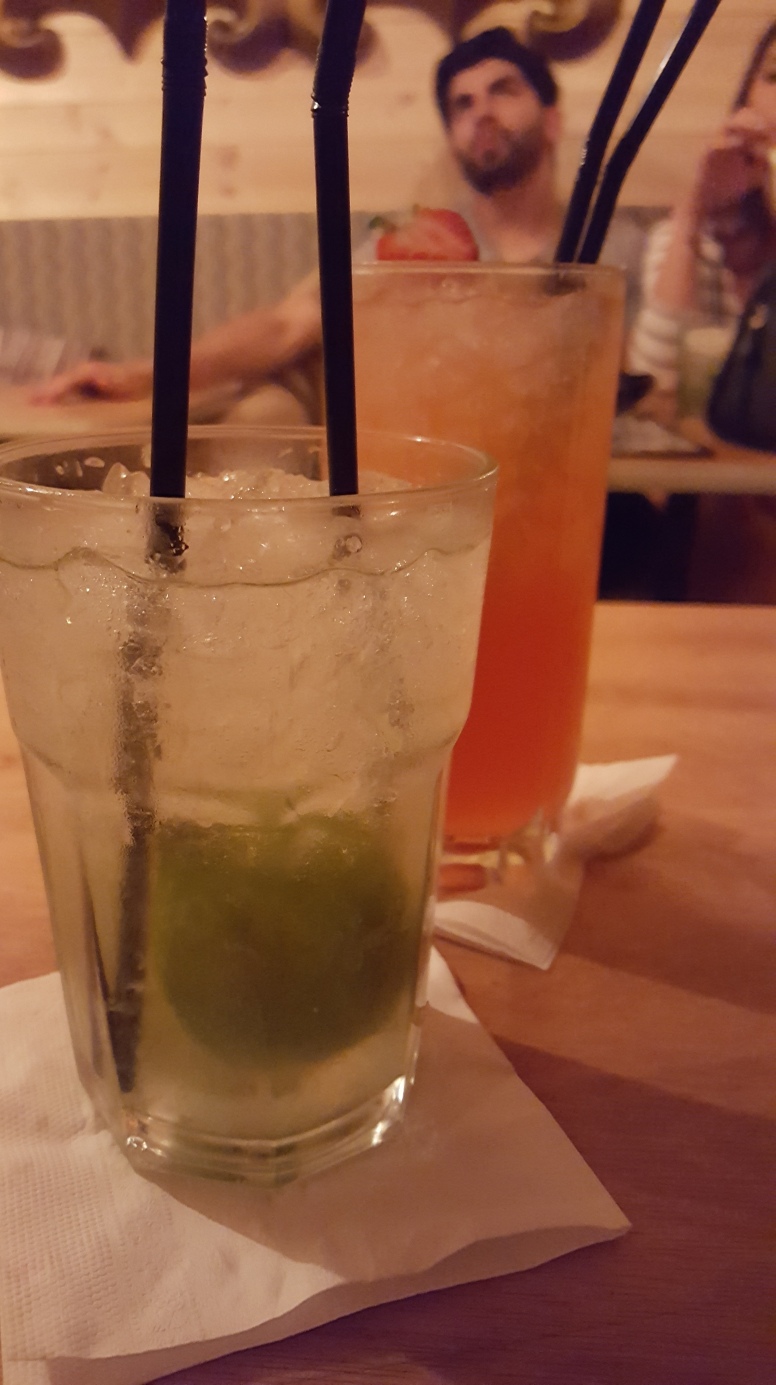 Like super cheap. A glass of house wine for 2.50 – 5 euros. A whole bottle of wine at dinner, 13 euros – and it wasn’t the cheapest on the menu. We’ve become accustomed to $10-$15 cocktails at home (who do you think you are, Nashville? C’mon…) so finding mojitos for 3.50 or a caipiriña for 7 euros is a pleasant surprise. Especially when they’re squeezing real limes, muddling real mint, and mixing in real sugar. No premixed stuff. All legit, handmade drinks. For less than 10 euros, often less than 5 euros. We are happy people.

This is a drinking town with good food.

I don’t even like food (and honestly a lot of food doesn’t like me) but I’ve had some delicious noms here. Grilled squid, cooked in olive oil, garlic and dressed with parsley? Sign me up. This is the best thing I’ve had so far and now my favorite form of calamari. I’ve even been a little more adventurous, trying new food like mussels (meh, would maybe try again), cuttlefish (ick, like squid’s boring, chewy cousin), ceviche (still not my thing), padron peppers (not bad). I love the idea of tapas, and the fact that you can eat inexpensively without having to try hard. (It should be noted that Justin said while he was not “blown away” by the food, he prefers the food here to where we live.)

The view from the roof of the cathedral 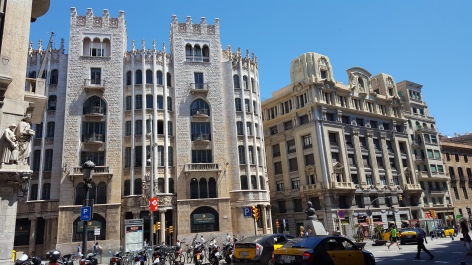 America is still a young country. The Hermitage Hotel, in downtown Nashville, is “old” to us and it was built at the beginning of the 20th century. The house next door to ours is the second oldest home in Nashville and it was built in the early 1800s. These things are old. But our Barcelona AirBNB is 250 years old; that’s older than the United States by 10 years. When we walked through the Cathedral of Barcelona, two blocks from our apartment, awed by the construction, taking in the grandness of the church, the beauty of the stained glass, we couldn’t imagine how they built it… because they started construction on it in the 1298. The 13th century. Just… what. I can’t even. We’re standing in the middle of this massive cathedral, more than 700 years old. That’s just mind-blowing for my American mind. 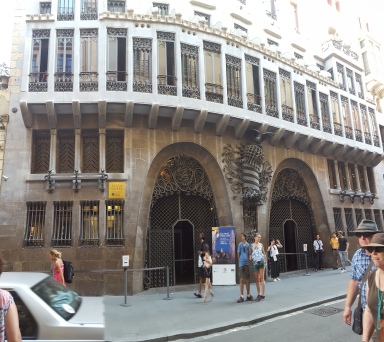 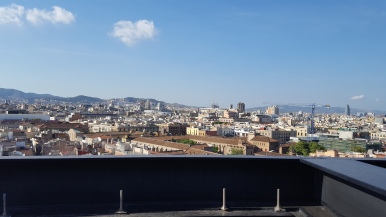 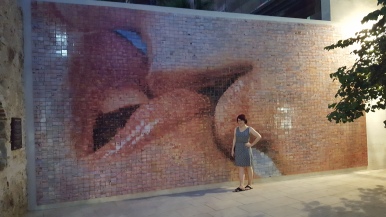 I’ve not yet been to a European city and said, “well this is shit.” What city is NOT beautiful? Venice? Paris? Amsterdam? Dublin? No, all of them are beautiful in their own way, and they’re all so old and different from what we have in the States that we’ll be endlessly entertained and awed by the surrounding architecture. So that’s part of the charm of Barcelona. The juxtaposition of the old mixed with the new, the ancient crumbling cobblestone streets lined with hip, modern hotels. Buildings from the 1500s, 1800s, and 2000s, one right after the other, gargoyles next to iron balcony railings next to glass office buildings. But so much of this city is pure art. Gaudi is probably responsible for a lot of that but I’m not up on my art history as much as I should be so there are probably a lot of other artistic influences. But much of what we’ve seen so far was created by Gaudi (and much of what we have left to see too!), so in my mind, he and this city are synonymous, in the same way as Nashville and country music or New York and pizza. And his presence elevates the historic beauty of this city to another level. But Gaudi aside, there’s art everywhere so there’s always something beautiful to look at.

Such a diverse crowd. 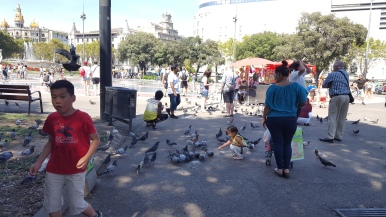 Barcelona already has a bit of an identity crisis being a metropolitan city in the region of Catalan in the country of Spain. There are two official languages – Catalan and Spanish. The Catalans want to splinter off as independents. The Spanish government used to try to squash the Catalan culture. So it’s not really a Spanish town and it’s not really Catalan either. We had worried about needing to learn Spanish before arriving but I don’t think it’s necessary. One of our waiters told us that they learn Catalan in schools as the official language and that many kids choose to learn Spanish as their second language, as they need it anyway in every day life. And most of the people we’ve met speak a little bit of English. But aside from the two native cultures here, this is such a diverse city.

Walking through the Raval barrio, we saw nothing but Arabic, Indian, Pakistani, northern African, and various other middle eastern restaurants, shops, cafes. Stores selling vibrant Indian prints. Street vendors selling Chinese treats. We’ve passed dozens of Irish pubs, Russian stores, Indian-run supermarkets. We could eat paella as easily as naan, buy Native American dreamweavers as Indian saris, see a woman in a bikini as a headscarf. We’ve seen dreadlocks, abayas, dyed hair, bald heads, shaved heads, braids, long frizzy hair, flat ironed, man buns. Hairstyles of every kind, tattoos of every kind. Clothes of every kind. People of every size, shape, color, gender and sexual orientation walk the streets, holding hands, not giving a shit what you think about them. It’s refreshing, and on an unfortunate level a little surprising. We come from a pretty white town. We have mostly straight, white, cis-gendered friends. We do not live in a diverse community, so witnessing this ease of diversity, that’s unforced and so natural, is beautiful and relieving in many ways.

And now, from a totally American perspective: there seems to be a large Muslim population, which is not something we see a whole heck of a lot of in the Bible Belt. (I’m having a hard time finding any population stats prior to 2014, but in that year 322,000 residents out of 1.5 million identified as Muslim, and is that huge? No. But it’s not insignificant. For comparison, a 2015 statistic says that only 3.3 million Muslims live in America. ALL of America. Here’s a site that catalogs the number of Muslims per country, and 2.3% of Spain’s population is Islamic whereas only .8% of the US population is. And the region of Catalonia has a lot of historic Islamic influence.) But these people are not oppressed or terrorists. They are families, on vacation or just living in Spain. Their children play in the playgrounds with black kids, Asian kids, Spanish kids. They sit in cafes drinking Coke alongside gay Germans on vacation drinking cava and monolingual Americans eating anchovies for the first time. These people in hijabs, walking with their brown children, wearing men’s Arabian pantsuits (I think they’re called Kameez?), pushing strollers and doing their daily market shopping. It’s a beautiful, colorful city full of beautiful, colorful people. I love it.

The Gothic Quarter is not what we were expecting. 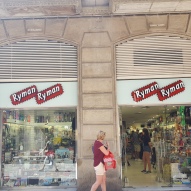 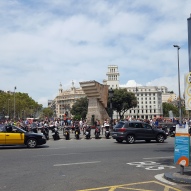 To be fair, I didn’t do my usual weeks of research before our trip. I found an affordable AirBNB in el Gotico, it seemed very central, I heard this was a fun, lively area, and so I said bueno! Booked! What we did not know was that this is the “downtown” area, super commercial, super touristy, super crowded. It’s lively in a full-of-tourists-shopping way. There are more shoestores than we could ever hope to count. A Disney store graces the corner of our block. The whole area is one giant shopping mall. Now, this isn’t to say there aren’t positives about the area. It IS very central and easy to get to surrounding neighborhoods. We are steps from the Barcelona Cathedral, which is a convenient landmark for navigating around the city. And lots of tourists generally means more police presence. It’s clean, it’s safe, and while it’s lively it’s not crazy at night.

La Rambla is the worst.

The absolute worst. It’s like Beverly Hills meets the Champs Elysees, filled with the population of China. Too. Many. People. Overpriced food and drink. All English-speaking. No authenticity. All commercial. No character. We have been doing our best to avoid it.

August is full of tourists.

Look at all the people.

If we could have taken this trip later into the fall, we would have but we’re already interfering with football season by two weeks, so it is what it is. We are dealing with it. But my god… there are SO MANY PEOPLE. July and August are pretty much the worst times to visit this continent as everyone and their mother are on holiday right now. Half of the shops and restaurants we pass by are closed for vacation. And the majority of the languages we overhear in the street are not Catalan or Spanish. Our ears overflow with English-speaking accents, familiar French words, middle eastern languages I can’t identify. Italian, German, Swedish. Definitely a lot of Asian countries represented. Everyone but the natives. This is fine, it’s still a unique experience, especially for my husband who hasn’t been out of the country or to a place with so many nationalities represented, but it’s not exactly a local experience or a truly Barcelonian experience either. Despite the over-crowded streets, we haven’t had a problem finding tables and counter space at bars and restaurants, so I suppose we’ll just order another bottle of rioja and cheers to this beautiful city!

✨ N E W B L O G ✨
Yesterday we spent a gorgeous #sundayfunday at @luckyladdfarms, one of our favorite outdoor spots to take a kid. The adults can sit in the shade, eating snacks and catching up while the kid(s) run wild and spend thirty minutes at a time playing with the duck races and giant connect four games haha. Skyler did want to ride the tractor coaster several times so we all joined him for the first one (even my dad. See how much fun he's having! Haha)
Another fun afternoon at @luckyladdfarms!
Took my little guy out for our own little Sunday Funday last weekend. I was feeling antsy and didn't want to sit in the house all day, but the weather was iffy much of the day with rain. So we walked around the mall for a while (well he napped in the stroller while I shopped) and grabbed a late afternoon snack and margarita at Chuys. He loved playing in the bushes outside the mall, but wouldn't it be even cooler if they had a playground for all of the kids??? Just thjnk how much easier it would be when people have to wait for food, to let the kids burn off energy. Is there a petition we can sign? Lol
Alright yall, as I gear up for the fall and winter, I need to reinvigorate my posting schedule. So what would be of interest to you????
Books 19 - 24 (2022)