Though I’ve been a few times, LA has never been high on my list of places to go. I don’t remember much from my first trip, when I was 11, or all that much from the trip I took at age 20. But I have only been back once in the last decade. Maybe the traffic deterred me. Or the timezone, so behind everyone else on a normal work day. Or my preconceptions about the plastic people. Perhaps it was the vague threat of earthquakes or the high cost of living. Or a combination of everything. Something has kept me from making the trip out there to visit friends for far too long.

So I took advantage of Southwest’s direct flight from BNA to LAX and spent a long weekend catching up with old friends: Kathleen, whom I’ve known since Mrs. Young’s 6th grade geography class at Seminole Middle, and Cari, one of my besties from high school. 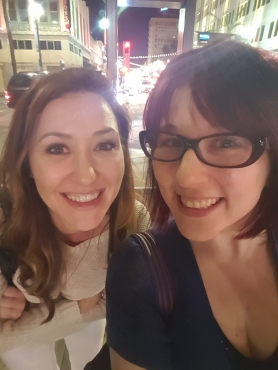 People make up a place. Sure, restaurants and bars and landmarks are part of it, and the scenery and historical monuments, too. But the part of any place that sticks with you is its population, the people you meet.

Out of all of my previous trips to LA, the one that stands out most in my mind was the weekend I worked as a PA on my friend’s film. Stressful, exhausting, exhilarating. I remember the sets and driving in LA traffic for the first time and waking up at 4 am. But the things I remember the most were the people I met on set. The other PAs, a husband and wife team (both of whom were furries…). The woman I shared a hotel room with, who suffered from thunderous sleep apnea. The AD, who was generally a funny and kind person, until he snapped into directing mode. The actors, who were all excited to be in a meaningful indie short, and treated the crew with respect. The trip was short, however, and I was back home 72 hours later, never to see any of those folks again.

Some of the crew

Killing time in the car, staying out of the desert wind

Me, standing in for one of the actors

That was in 2007. I had also previously visited LA in 2005, for a few days, and once as a kid on a trip that also included San Francisco and Hearst Castle.

It was definitely time for me to meet LA again.

Spending time with two friends who live in two very different LA circles made for a unique experience that allowed me to see much more of the city than if I had only visited one of them or been on my own. There were cats and cocktails, race cars and street art. Hillside mansions and adorable bungalows that were $500,000 out of my budget. I saw gorgeous views of the city while sipping overpriced glasses of wine and I even caught sight of a couple celebrities. It was too short a trip, so I need to go back, but it was packed with sun and fun and, of course, lots of tacos. 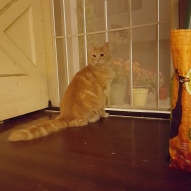 Percy, one of four cats of the weekend

Cari’s apartment, aka my office for the first part of the trip 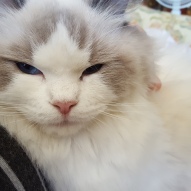 Here are the highlights:

Beers and Queers
The perfect way to begin my whirlwind weekend of fun in the City of Angels, Beers and Queers was a movie-screening event at a brewery complete with food trucks and raffle prizes. The movie of the night, Clue, was a classic I’d actually never seen (shhh). After Cari picked me up from the airport, we headed straight to Angel City Brewery in the revitalized arts district of downtown. Street art everywhere, I wasn’t sure where to look first. Street art is one of my favorite things about city life, and LA’s was colorful and unique, for sure. The night’s fun was right up my alley!

Love the street art on this brewery

The Church
Cari’s group of friends deserve their own reality series. Not because of any drama but because of how uniquely their friend circle operates. Congregating most nights at a house they nicknamed The Church (due to the beautiful stained glass windows), they have organized dinner clubs and movie nights, Saturday “Crafternoons” and Nerf gun wars. Their Google calendar is full of birthday celebrations, DND nights, and committee meetings to plan parties, comedy performances and ultimate frisbee competitions. The Church, which houses five other people besides the owner, has an open-door policy so you never know who may or may not be there. We went over for Liquor Cabinet club, to learn how to make Boston Sours, and shared the kitchen with the Dinner Club (it was Bangers n’ Mash night). By the time we left, around 11 pm, the living room was full of 20 or so people, some dinner club attendees, others just there because it was Friday night, and what better place to be than among friends in a house that celebrates fun, togetherness and being different?

“To be clear, this is not a YouTube party. I’m checking my Facebook and you’re coming with me.”

Some of the stained glass at The Church 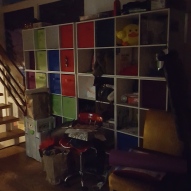 Cubbies for housemates and visitors 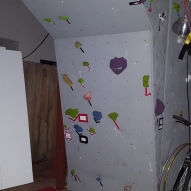 Ready for the next Nerf War!

The Hollywood Reservoir
We meandered up the hills via curvy, narrow roads, oohing and ahhing at the million-dollar homes and surrounding views. While living up in this area of town would be inconvenient (what do you do if you need to quickly run to the store??), the views make the trek up the hills worth it. It was the perfect day for a little sight-seeing and no trip to LA is complete without a Hollywood sign photo. For the history of the Mulholland Dam and the reservoir, check this out. 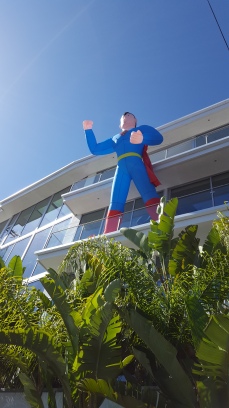 The Long Beach Grand Prix
I would never choose to attend a racing event; cars hold no interest for me. But Kathleen had to attend for an unexpected work event, and got a free pass for me to join her. Getting to Long Beach meant the longest Uber ride of my life (an hour and ten minutes talking to an EDM DJ and pretending to care), but resulted in a fun night of delicious cocktails and seafood and exploring the Long Beach night life. The next day we hung out at the race, which was crowded and hot and loud and exhilarating. Totally worth it. It was my first race and I got to see Michael Andretti up close!

The view from the condo 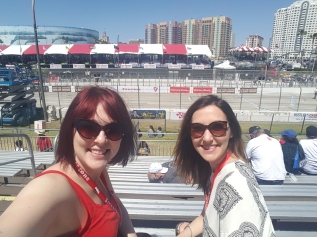 Kathleen and me at the races. I’ve known this girl for 20 years!!

That’s Michael Andretti, in the black.

The Secret Celebrity Cemetery
On my last day in town, Kathleen drove me around a bit after work and before I had to be at the airport. One of our stops included a cemetery where lots of famous people are buried, but that no one would ever know was there. Hidden between some condo buildings, this tiny little cemetery was quite the gem of a resting place. 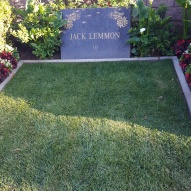 Jack Lemon, always with a good sense of humor 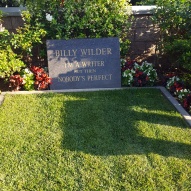 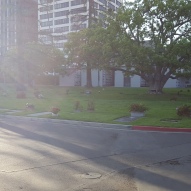 Lunch with Mick
Mick has stories about my parents they probably don’t want me to hear, or at least would want to be present for if he told them. They knew each other back in their wild rock n roll days, just after they moved to California. Though he’s lived in the states since the early 80s, Mick’s Coventry accent hasn’t worn off. He took me to his favorite English pub, that he’s been frequenting since before I was born, and though our catch up session was short, it was awesome just to get to see him. 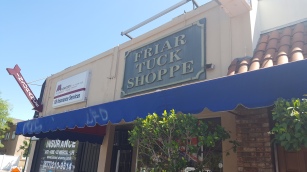 The Tacos
As promised, I got to eat my share of tacos. Three meals in four days. And they were all delicious. First, some traditional chicken tacos with onions and cilantro from Leo’s taco truck. Two days later, tasty chicken mole tacos from the Farmer’s Market. And that night, mahi mahi tacos from California Pizza Kitchen. All delicious in their own ways.

LA is a weird and wonderful place that deserves more time to explore. I look forward to visiting again, hopefully with my husband, but next time I won’t wait nearly a decade before returning!

#tbt to a year ago, when we packed enough for two weeks for a two night staycation. We've learned to travel a bit lighter since then but traveling with kids always means needing so much stuff to maintain some semblance of a routine while away from home. What are your must haves to create a home away from home?
When you don't want to leave the house but also need to beat the heat.
Excellent dinner at @lockelandtable. Small cozy place full of personality, reminds me a bit of eating in the EU. Delicious food. The empanadas were to die for. I wish I had three orders! So. Effing. Good. Will def return!
#nashville #broadway #streetart #mural #nashvillemurals #fifthandbroadway #touristinyourowntown #nashvilletn #musiccity
A Tale of Two Party Buses
Looking for a cheap way to entertain the kiddos for a few hours on a hot day? The wave pool is only $12 for adults, $10 for kids 3-12, and free for under 2! It's basic AF but gets the job done, when you just need some water time. There's a kiddie pool, a few slides, lots of free inner tubes, some picnic tables under giant umbrellas, and plenty of space. Sundays seem to be less crowded! We'll def be returning a few more times this summer!